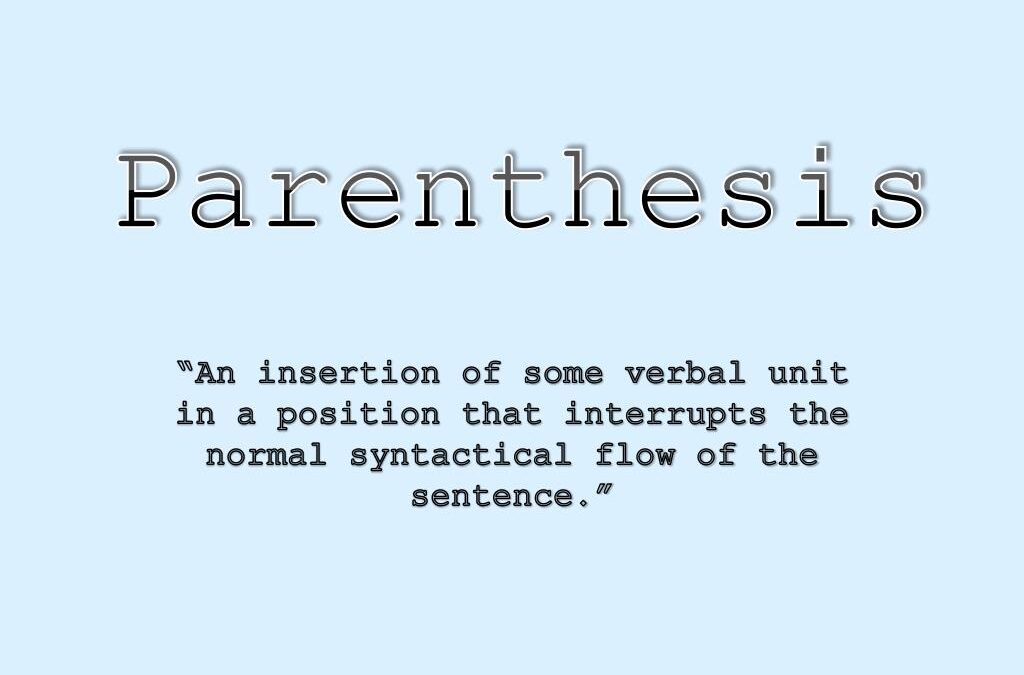 Parentheses is usually a grammatical term by which I mean brackets. But parentheses also refer to a rhetorical technique that does something similar. It’s where you break the flow of everyday speech to add in something extra. Now clearly, unlike the grammar, you can’t see these parentheses. But you can hear them on the audio clip of that last line. You can even see where it sounds where this gap is. Now the sentence would have worked perfectly fine without their addition. But by adding it in and breaking the flow draws attention to that detail. Now there are way too many things to cover that you could use parentheses for.

Types of parenthesis according to brackets

Brackets come in pairs, and I used to add extra information to a sentence. This additional information can be a word, a phrase, or even an entire sentence.

There are two types of brackets.

The first type is parentheses. Parentheses are generally used to add extra information in the sentence.

The sentence should still make sense if the bracket element is removed. For example, if we remove all day. Phillip studied for the grammar test the sentence still makes sense.

In the second example, if we remove the bracket element. We’re left with, I went to the museum with Becky. So, the sentence still makes sense.

The second type of bracket is square brackets square. Brackets show that words have been added to a direct quotation. It may be necessary to use square brackets to provide extra information for a quote to make sense.

This quote isn’t apparent as there isn’t much context. However, we can provide extra information using the square brackets. For example

The comma belongs to the surrounding sentence; therefore, we place the com to show this after closing the brackets.

First of all, they look like (  ). Its job is to surround extra information in a sentence that could remove without impacting the meaning of important information in that sentence. There are the following uses of parenthesis.

Perhaps the most common things that you’ll find in parentheses are acronyms, which are multiple-letter abbreviations, usually for things like organizations, schools, and leagues.

The first example (MSU) is an abbreviation of three-letter words Michigan State University.

The Second example (NBA) is an abbreviation of the three-letter words National Basketball Association.

Same in the third example (PTO) is an abbreviation of three-letter words paid time off.

2.   For date ranges or life spans

Another everyday use of parentheses is for date ranges or life spans:

We can also use parentheses for page numbers.

The second example (pages 30 to 90) is the page numbers in parenthesis for English book chapter 4.

In the first example (24 inches) are measurements for two feet in parenthesis.

In the first example (72 inches) are measurements for 6 feet height in parenthesis.

Methods to Use Parenthesis

I think you get the idea. The point is we use parentheses to surround extra information in a sentence, kind of like we would with commas but for more specific things. And other than that basic idea, there are only three things that you need to remember when using parentheses.

First, the stuff in parentheses should always come after the primary information.

You want the stuff in parentheses —the “parenthetical information “—to come after the main info.  You also don’t want to use the extra information as the primary information.

The acronym should come after the full name, not before.

And the only other rule that you need to remember is that you should take the stuff in parentheses out of your sentence and still have a sentence left. And that includes having all of the punctuation marks that you would need.

Now, at a glance, this might look correct to you. There’s extra information here; it’s a date; we’re all good.

Look what would happen if we took the stuff in parentheses out of this sentence; what would the rest of it say?

The point I’m getting here is that you can’t just put parentheses around every date or every acronym or every page number you see. You have to look to make sure that you can take away that stuff and still have a sentence. And the same thing is true for situations like this:

Now, if we remove the stuff in parentheses here, there is still a sentence:

Except there’s one small problem—do you see it? Putting the period inside the parentheses as we did means we would take out the period from the sentence, which would be a problem because, you know, sentences need periods—or some end mark at least. The correct version of that sentence would look like this

—with the period on the outside, so it doesn’t get, like, hijacked and deleted from the sentence with the other stuff.

Now, you can have punctuation inside parentheses. It doesn’t always have to go on the outside. My point was that you have to look at it and sort of, you know, use your brain a little bit.

So the first thing we need to do is make sure that the stuff in parentheses is extra information—and it is. It tells us more about the Civil War.

So, now all we need to do is see what would happen if we take that information out.

So, look at the information in parentheses. What do you think? Is it extra? Is that stuff that we don’t need? No, right? That’s not extra; that’s the primary information.

“GVSU”—the acronym—is what should be in parentheses. It is how the sentence should look.

So, check the information in parentheses; is it extra? Yes, it is. Now, let’s see if we can take it out and still have a sentence.

Because what did we do? Well, we hijacked the period.

With the period inside the parentheses like that, if we take this stuff out, that means the period would go away too, which is a problem because then we wouldn’t end our sentence. So, to fix that, we would very simply do this.

Take a look at the stuff in the parentheses, and see if it is extra. Cool, it is.

We use it in English all the time. Do you know about the intonation pattern that we use when we use parentheses? These are precisely the things I’m going to help you with within life speech. We tend to think, feel and speak almost simultaneously. It means that we might have more information or more context to add part of the way through one thought. Or we might want to express our feelings or opinions about what we’ve just said before we continue. And that’s parentheses. We tend to use it midway through an ongoing thought.

So the part between brackets is parenthesized. However, it’s a bit of information that isn’t essential. But it’s a different context than we were giving that expresses a bit of how we feel.

Pitch of voice during parenthesis rhetorical

Now typically in parentheses, we tend to change the pitch of our voice to indicate that this is a sort of an aside. It’s commentary. It’s extra information. It makes us sound more spontaneous. But it’s the pitch of the voice that indicates that that indeed is the parenthetical comment.

So, at the (and this has been going on for some time), the voice pitch will change. The pitch of my voice went down on the parenthetical comment. This down pitch of the voice will show that this is the parenthesis part of the rhetorical.

In addition to this, we tend to use a rising or an upward inflection on the last word in the parenthetical comment. To indicate that it was about to rejoin the main thing that we were talking about, the main thought was the main comment.