Life of a Gladiator Research Paper During The Roman Empire

Life of a Gladiator Research Paper During The Roman Empire 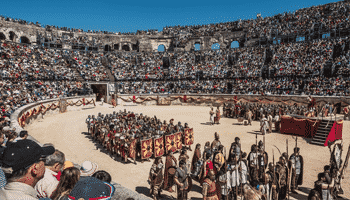 During the Roman empire the life of gladiator was a lavish one as better than that of an ancient Rome. They were provided all types of foods, baths and treated. All their energy was geared towards fighting each other.

The word gladiator is derived from the Latin word gladius. This is the meaning for the short sword used in battle by gladiators. In the Roman army, this sword was equally used by soldiers. The use of this sword was primarily to please the crowd. For those who have watched gladiator games, we tend to relate the life of gladiators with brutality, blood and gore but the question is; is this the real story behind the gladiator characters. In this article we are much interested in learning more of what was really like to be a gladiator. This kind of information is essential to students intending to write essays about the life of gladiators during the Roman Empire

Who Were Roman Gladiators

Roman gladiators are considered one of the most iconic characters of history and for this reason; they have continued to define how we view and defined entertainment for ancient Rome. Being portrayed in stories and films has turned gladiators into conventional legends- having to face death on a daily basis which is certainly a factor that should not be taken lightly. Gladiator tales cannot be compared to anything we do or see in the present world and this make them intriguing and at the same time incomprehensible.

During training, gladiators did not apply the use of actual weapons that they would be using at the arena. They instead used wooden training materials that were referred to as ‘Rudus’. Generally, gladiator training focused much on the distinct styles used in fighting and the numerous weapons that were used by different gladiators. This question is interesting to me because at some point in my life I found ancient arenas very intriguing.

I thought that humans who fought against fierce animals engaged in odd activities because how could someone come up with such an idea/activity knowing fully well that the gladiator was going to die eventually. In fighting with fierce animals, there was a 75 percent chance that the gladiator would die compared to an activity between a gladiator and a gladiator. At this point, I could not help but wonder what it would feel like being a gladiator especially having to feel all the pressure coming from the audience and the inner conviction to kill animals or other gladiators before they could get killed.

Many historians believed that the function of gladiator fighting can be traced to the Etruscans who acted as hosts to such contests as part of religious death rights. I think these events were used to memorialize the death of significant aristocrats and wealthy nobles, compelling prisoners to fight. Most times gladiators were viewed as slaves. This however, was a traditional view. Gladiators were both free men and slaves. Free men because they were not compelled to join training school but slavery in gladiators was evident when prisoners were forced to join gladiator training schools to fight.

Diets for gladiators comprised of carbohydrates and proteins and no option for wine but only water. Most gladiators were fit to fight because of the masculine nature bit very few of them were little and weak. When we think of gladiators, we only think of men but a more surprising fact in that even women were encouraged to be part of gladiator war. However, women who were prisoners were forced into the pit together with their male counterparts.