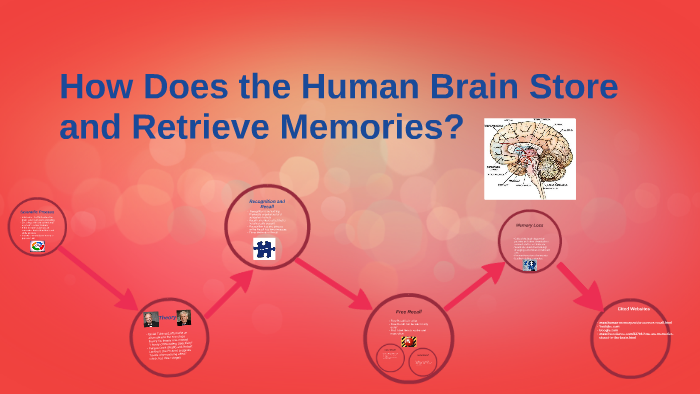 The human brain is an incredible organ that does many things. It helps us think, feel, and move our bodies. But the most important thing it does is a store and retrieve memories. Memories are stored in different parts of the brain depending on their importance to you as a person. For example, the hippocampus is where short-term memories are stored before they are transferred elsewhere for long-term storage or lost forever if not recalled within three hours after initial memory encoding.

Isn’t it weird that we can remember milestones that happened in our lives years ago, yet we cannot remember what we had for breakfast just a week ago! Memory is actually amongst the most complex processes of the brain. While most people refer to memory as something that we ordinarily possess, the reality is that memory is not physically present but rather just a concept that refers to the process involved in the storage and subsequent retrieval of information known as remembering.  The ability of the human brain to store and retrieve information is essential for individuals to function. Imagine how we would function as humans if we could not remember the past; how can we even operate in the present? Without memory, we would be unable to learn and fail in processing vast amounts of information. Indeed memories underlie so much of our lives, including the ability to recognize each other.

Researchers have established that memories are stored in multiple brain structures through neurons and molecules in recent years. Probably, the brain has billions of neurons that each typically connects to thousands of other neurons. Nonetheless, the memory process has a series of steps that is initialized from the encoding of information. Encoding starts with the perception, which travels to the part of the brain known as the hippocampus.

Generally, information flows through the brain and neural circuits networks, resulting in strong or weak responses (synapses). The strengthening and weakening of the synapses are how the brain stores information. The mechanism behind memory storage is known as the “long-term potentiation” or “LTP.” Neuroscientists highlight that the frontal cortex, along with the hippocampus, is responsible for analyzing sensory inputs and deciding whether such information should be stored in short or long-term memory. However, most scientists believe that memories are held temporarily in the hippocampus. They are recorded and disseminated throughout the brain through a process known as memory consolidation that typically occurs during sleep. Generally, short-term memory has a limited capacity, only capable of holding information for just 20 to 30 seconds at a specific time. After processing, the information can either be dispersed or transferred into long-term memory.

The precise manner in which long-term memories are represented and structured across multiple synapses is still mysterious. Long-term memories such as behavioral skills are evenly stored throughout the brain using a distributed representation that is highly efficient and redundant. Behavioral skill memories, as well as factual knowledge, are stored in the unconscious and conscious memory. The unconscious memory is responsible for forming memory that we are unaware of, such as riding a bike. Unconscious memory is often had to acquire and more resistant to change.

On the other hand, conscious memory stores factual information such as names and dates. Such information is acquired swiftly and also swiftly lost. So then, how do we retrieve these memories? When we fail to retrieve the information, the information was not encoded in the short and long-term memory. Nevertheless, if we can first, the memory must be transferred from the unconscious level of memory storage to the conscious level. For instance, if you have been given a list of numbers to remember, you can retrieve the second on the list. Your memory would go through the list as it perceived it then retrieve it.

In essence, Studies on memory are still in infancy. Little is known about how memory works at the molecular level; for example, how do the neurons code these messages?

Your brain stores memories in groups of related information. The more you think about a particular memory, the stronger it will be stored. Groups of strong memories help to recall other memories that are associated with them. This means that if your goal is to remember something specific, then try thinking about other things that might also have some bearing on what you’re trying to remember and store those as well (like where you were when it happened).-You can strengthen certain associations by repeating these thought processes multiple times over time.-Memory retrieval requires an association between the item being recalled and one or more previously established mental structures for “memory storage.” For example, A person forgets their ATM card at home, so they return there – this action activates a neural circuit connecting retrieving