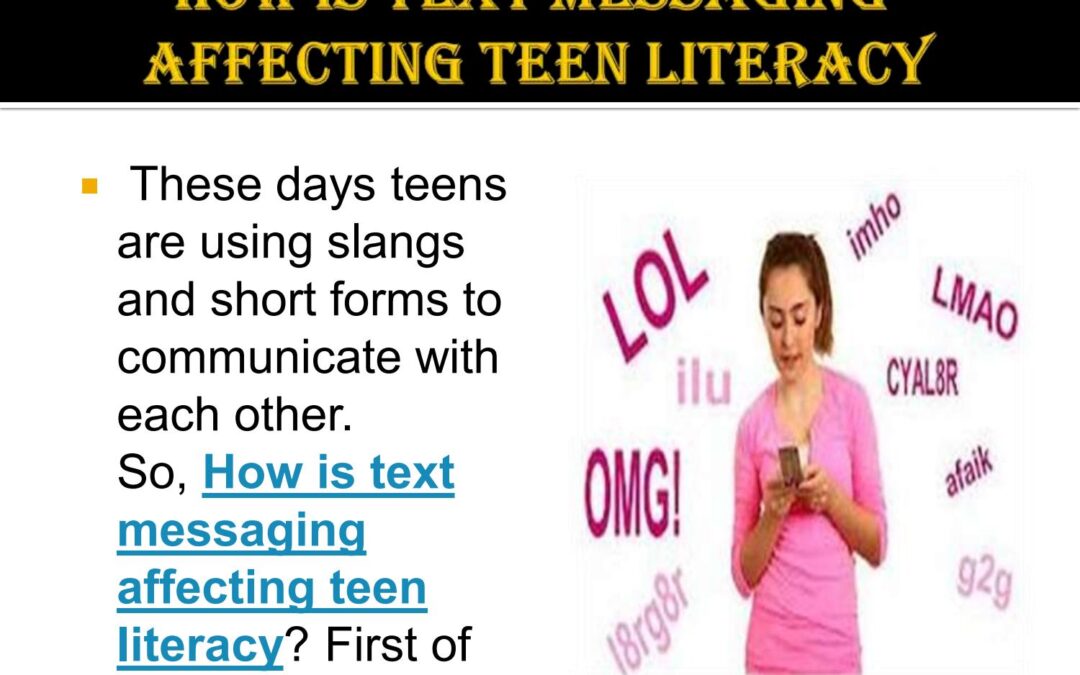 Text messaging has become a popular way for teens to communicate with each other. However, some studies show that text messages have decreased the literacy skills of young adults because they do not require a lot of reading or writing. This blog post will discuss how this is affecting teen literacy and what can be done about it.

Over the decades, the evolution of technology has rapidly accelerated the invention of innovative devices. As a result, cell phones have become the necessity of modern life for almost all teenagers and adults. Cellphones are used to purchase goods, pay bills, access music, access lecturers or solve everyday concerns. Indeed cellphones are a necessity! For the most part, the burgeoning smartphone and apps have revolutionized the way we communicate and popularize a new language.

Altogether, the introduction of the text messaging feature has accelerated conversations via SMS to a large group of people, especially teenagers. In today’s age, nearly a generation of teens can access mobile phones. A study conducted by the Internet and American Life Project found that almost 75% of all teenagers had access to mobile phones in 2015. In addition, an average American teenager spends nearly 100 text messages a day, representing about 60% of American teenagers that use their phones to text each day. Research indicates that modern-day teenagers are more concerned about their phones than even their books both at school and home. Teenagers are so obsessed with texting that research suggests that, on average, teenagers spend more time on their phones than on any other thing.

Unfortunately, while texting is widely used by teenagers to quickly and instantly get conversation, the trend though beneficial, has over time created diverse concerns, especially about teenage literacy. Most teenagers don’t focus much on basic grammar and spelling and at times misspell some words. This is highly harmful since the trend is in most cases passed in their education as almost all teenagers tend to write in the same way as the text. Arguably, t teenagers who frequently text have little control over their habits. After a while, just like other repetitive tasks, the brain picks the pattern and stores it permanently, enhancing repetition of the same even unknowingly. In essence, many are against the habit of texting since it weakens teenager’s mental ability by making them commit mistakes in grammar and spelling.

Furthermore, the new language” may replace Standard English and teenagers may be unable to use language appropriately. The latest fad in texting involves using “textese.” Textese involves abbreviated vocabulary consisting of numbers and texts, emoticons, and short phrases.  The language is rooted in text messages that initially contained only 120 characters, forcing users to develop economic approaches to communication within these limitations. Abbreviations such as TC (take care), LOL (laughing out loud), TY (thank you), 2nite (tonight), and etcetera are standard features in the ‘new language,’ including others like 2nite (tonight). Other complicated abbreviations include ‘CWOT,’ ‘IDC’ to mean a complete waste of time, and I don’t care, respectively.

The use of such abbreviations may be an outlier, and texting may reduce teenage literacy, reading skills, and fluency in spelling. The texting style has been found to prop up even in teenage students’ school texts and assignments. The ‘new language’ that teenagers on their phones use hurts their literacy.  Apart from textism, it is reported that most teenage students have numerous problems in basic literacy from spellings, punctuation, language, and grammar. Besides affecting teenage student literacy, issues related to excessive text messaging significantly affect the teachers since they have hard time rating tests and assignments primarily written in texting. On the flip side, researchers have found some positive effects on teenage texting that range from emotional relief, conforming to on-trend language skills, and compounded benefits, especially for introverted teenagers.

In conclusion, Texting has become a part of our everyday lives, but is it affecting the literacy rates for teens? When we text, our brain doesn’t use as many words or work as hard to form sentences. This makes texting easier and faster than writing out long messages on social media or email. However, this lack of effort can make reading difficult for people who are used to communicating in person or by phone with others. If you’re interested in learning more about how technology impacts kids’ brains and what you should do if your teen is struggling with their grades at school