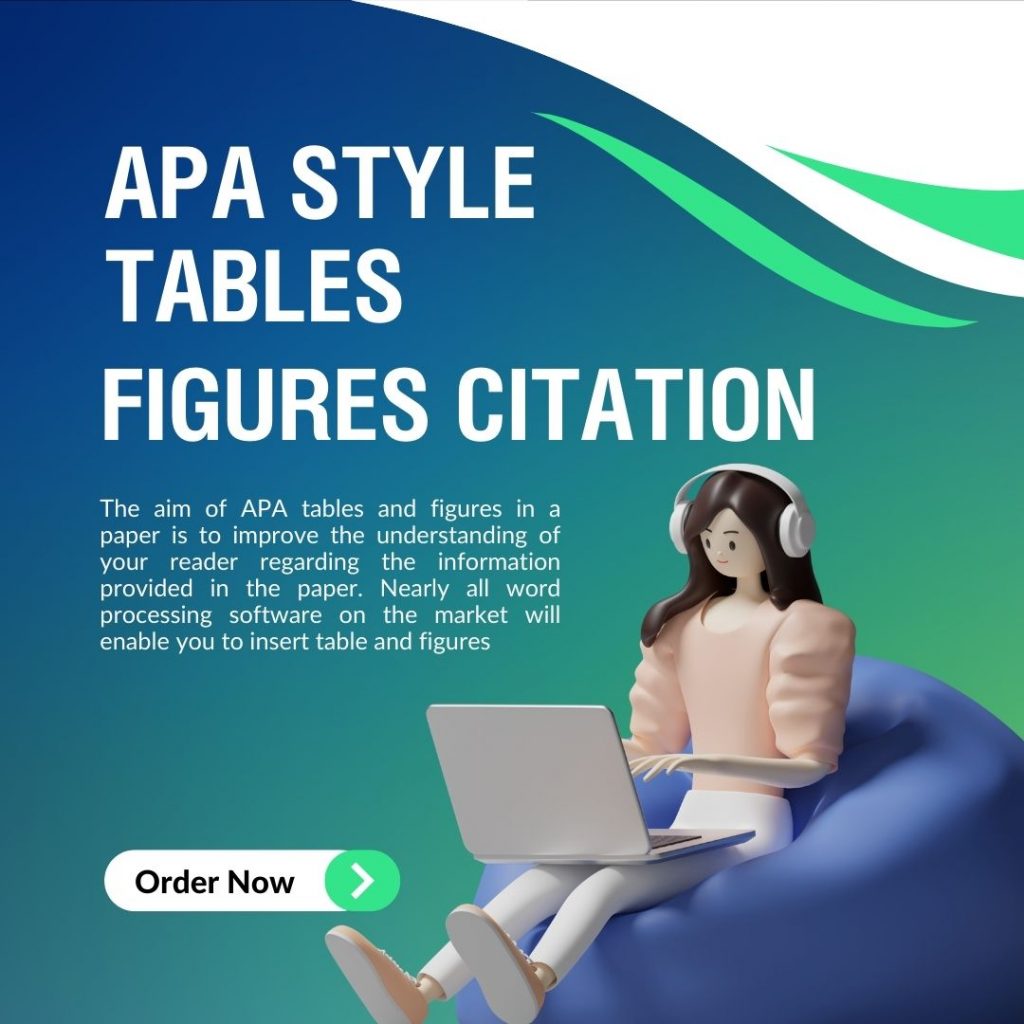 The aim of APA tables and  figures in a paper is to improve the understanding of your reader regarding the information provided in the paper. Nearly all word processing software on the market will enable you to insert table and figures.

Even a basic word processor should allow you to embed images, thereby, allowing you to put table and figures in any paper you are writing.

General rules for referencing tables and figures in APA

Necessity: graphic material like tables and figures allows the  author to efficiently and quickly present a huge amount of data or information  to the readers.

However,  visual images should be applied to help communicate the key points and not  just to fill up space, or mask  marginally important data behind an image of complex statistics.

Therefore,  before including any table or figure, ensure that they are necessary in the first place.  For example, for simple descriptive statistics,  just  present them as text,  no need to use a table.

Tables and Figures relation with text: since table and figures complement the information in text, when you include a table or a figure refer it in the text and also explain to the reader what it means. Include only important points that the reader need to get from the tables and figures, and let the reader get more details  on their own from the text.

Documentation: when using tables/ figures or data from  any other source,  ensure that you collect all the necessary information that you need for proper documentation of the sources used.

Honesty and independence: all the tables and  figures should be understandable without referring to the text. Therefore,  you should explain all the abbreviation used (unless they are standard statistical abbreviations)

Terminologies, abbreviations and probability level values should be uniform across the tables and figures within the paper.

In addition, the format of the paper,  titles,  headings and subheadings have to be  uniform and consistent.

Do not  create a table to present data that can be explained using a few lines within  the text. However,  if you have complex data, then  tables become necessary.

To present  quantitative data in clear and efficient  way, you need to arrange it systematical. For example, data that needs comparison has to be presented besides each other (male/female, boy/girl married/single etc. ).

Similarly, statistical information ( average, N values, ratios, standard deviations) should be presented in a different section of the table. Where possible, apply canonical forms ( for example,  regression, correlation or ANOVA) for effective presentation of your data.

The image below shows the general structure of tables.

Numbers. All tables should be number using Arabic numeral chronologically. Avoid using suffix letter (such as Table 2a, 2b, 2c); rather, combine the tables that are related. Where the paper has an appendix with tables, label them using capital letter and Arabic numbers (for example, Table C1, Table C2).

Titles. Like the title of the paper itself, each table must have a clear and concise title. When appropriate, you may use the title to explain an abbreviation parenthetically.

Titles. Each table included in the paper has to have a clear and short tile. Where possible use the title to explain the abbreviation in brackets.

Headings.  Put clear and short  headings. Ensure that the heading is no longer than the  longest entry within the column. Using standard abbreviation helps in attaining this goal.

Each column should have a specific heading, and this includes sub columns ( refer to sample structure), which traditionally lists all the main independent variables.

Analysis of Variance (ANOVA) Tables. The normal layout of an ANOVA table entails listing the source within the stub column. This is followed by degrees of freedom (df) together with the F ratios. Include the between-subject variables, followed by error first. This is then followed with within-subject and any error.

Enclose in parentheses the mean square errors. Include a general note explaining the meaning of the values used (see example below). Apply  asterisks to classify statistically significant F ratios.Also include a probability footnote.

When the research is purely applied, all the unstandardized coefficients or raw data (B), should be listed.

However, when the research is purely theoretical, you  just need to list the standardized coefficients (beta).

Where the study takes a mixed approach (is not  purely theoretical or applied), you need to list both unstandardized and standardized coefficients.

State the kind of analysis, could be simultaneous or hierarchical, and include the increments changes supposing you applied hierarchical regression.

We have three categories of notes that  can be included in a table. general specific and probability. Any of them is has to be  inserted below the below (and should be do done in the above order).

General notes: They explain, qualify or offer information regarding the whole table. Explain the abbreviations and symbols (and any other signs) used  using the general notes.

Specific notes: They are used to explain,  qualify or offer information regarding a certain row, column or a particular entry. In order to show specific notes, you need to apply superscript lowercase letters ( for example, a, b, c).

Arrange the superscripts starting from the left to the right, and top to bottom. The first footnote of the table has to start with superscripta.

Example:a n = 253. bTwo participant in the group were diagnosed with breast cancer in the course of the survey.

Probability notes: They are used to detail or present  results of tests carried out for statistical significance.

These notes are needed only when necessary to the data presented in paper. Ensure that you maintain same (number of ) asterisks for a particular alpha level all through the paper.

Tables obtained from other sources

Supposing you are using table from another source, you should replicate the structure of original table and ensure that you site the source of the table in line with APA style.